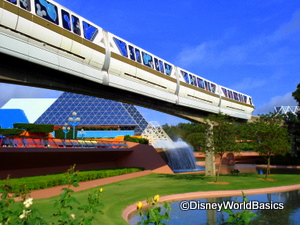 Disney World has a wonderful perk for those staying in Disney’s on-property resort hotels: Extra Magic Hours. We speak about them briefly in our How to Create a Touring Plan section of our Guide to Disney World, but I’d like to go into a bit more detail today about one park in particular — Epcot.

Morning Extra Magic Hour in Epcot offers Disney resort hotel guests access to some of Epcot’s most popular attractions for one full hour before scheduled opening time. Usually, this means you’ll be able to enter Epcot’s Future World (with your room key!) around 8:00am instead of the 9:00am opening time. Attractions available to guests at this time will be:

Don’t be concerned that World Showcase isn’t yet open; you’ll have plenty to cover with just Future World attractions, whose lines get extremely long later in the day and sometimes even during Evening Extra Magic Hours. For Morning Extra Magic Hour at Epcot, arrive 15 to 30 minutes prior to the gates opening. Once you show your key card and go through the gates, head straight to Soarin’ — this is Epcot’s most popular ride. If fastpasses are available, get a fastpass, then choose to either ride Soarin’ without the fastpass (then come back later to ride with your fastpass) or head over to Test Track for a spin around the racetrack! Once you hit those two rides, proceed along to your other favorites! You should be able to cover all of the “big ticket” attractions within two hours if you make good use of your Extra Magic Hour!

Epcot’s evening extra magic hours usually extend for three hours after the park officially closes to non-resort guests; most of the time, this means you’ll have access to the following attractions from 9pm to midnight:

The American Adventure in the American Pavilion
Gran Fiesta Tour Starring The Three Caballeros in the Mexico Pavilion
Honey, I Shrunk the Audience
Journey Into Imagination With Figment
Living with the Land
Maelstrom in the Norway Pavilion
Mission: SPACE
Soarin’
Spaceship Earth
Test Track

Your best bet in the evening: stick to less popular rides until the very end of the evening when most guests have headed home to bed. That’s when it’s most probably that the lines for major rides have shrunk.

Epcot is a fun and exciting theme park for all guests, but creative and skillful use of Extra Magic Hours can make your visit much more enjoyable!

This blog post is part of the DisMarks Disney Blog Carnival! There are lots more great Disney blog posts and articles there, so check them out!