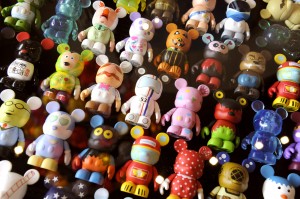 Vinylmation. What is it? It’s the next wave in the Disney collector craze — a series of toys sold exclusively at Disney theme parks, beginning in 2008.

The figures all start out as a plain vinyl Mickey Mouse, then are transformed by artists to resemble various characters and objects from Disney theme parks and movies. Ranging in size, the typical Vinylmation is 3 inches tall, but some are available as 1.5-inch Vinylmation Jr. keychains or larger 9-inch figures.

Some Vinylmation series are sold in clear boxes, so you know what you’re getting ahead of time, while other figures are packaged in a “blind box” or “mystery box,” which means you won’t know which figure you are getting until purchased.

FAQ from Disney, including where to buy and trade Vinylmations at Disney World, can be found here.