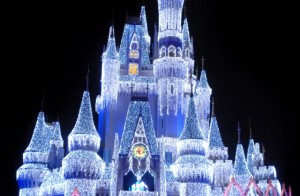 As soon as the jack-o-lanterns have been removed from the Magic Kingdom the garland and wreaths go up and it’s time for Christmas celebrations.

Queen Elsa will be lighting Cinderella Castle this year during the nightly Castle Dream Lights celebration. The castle will be decked out  in 200,000 sparkling lights giving it an icy glow.

The first Mickey’s Very Merry Christmas Party takes place November 7 and the party runs on select nights through December 19. Guests must purchase a separate ticket for this event.

Epcot’s holiday celebration includes the Candlelight Processional – the telling of the Christmas story by a celebrity narrator accompanied by an orchestra and choir. The narrators for this year are:

Other special events at Epcot include the Gingerbread Village inside The Land pavilion, a special ending for IllumiNations, and special food and beverage items throughout the park.

Guests visiting Disney’s Hollywood Studios can enjoy the Osborne Family Spectacle of Dancing Lights each night from November 7 through January 4, 2015.