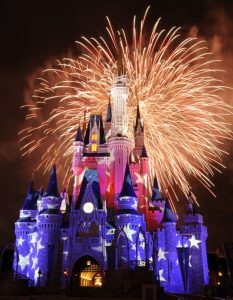 If you’re visiting Walt Disney World over the Fourth of July holiday you will have a chance to celebrate at several of the theme parks.

The Magic Kingdom is celebrating on July 3 and 4 with a  14-minute, 360-degree fireworks spectacular, ‘Disney’s Celebrate America! A Fourth of July Concert in the Sky.’ The fireworks display will be shown each night at 9 p.m.

The July 4 performance of IllumiNations: Reflections of Earth will feature a grand finale salute to America an 10 p.m.

Disney’s Hollywood Studios is presenting a ‘Rockin’ 4th of July Celebration’ beginning at 6 p.m. near the Sorcerer’s Hat. During the evening, Mulch, Sweat & Shears will perform at 7, 8, and 9 p.m. The party ends with a special rock ‘n roll fireworks show at 10:15 p.m.