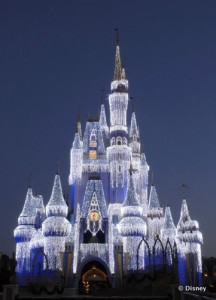 A Walt Disney World Vacation is a great thing no matter what time of year it is, but when the holidays come around it’s even more magical. In 2012 the official holiday season begins on November 9th with decorations and activities starting to go up all across the property. No matter when you visit during this time frame there’s just a little more magic in the air as Mickey and friends share the holidays with you.

Magic Kingdom
The Magic Kingdom will be decked out in it’s holiday finery, with your favorite Disney characters dressed up in their winter costumes. Holiday Wishes nighttime spectacular will transformation Cinderella’s Castle into a glimmering ice palace perfectly suited for the holidays crowned by a dazzling display of fireworks.

Epcot
Epcot is one of my favorite places to explore the holidays at Walt Disney World. Guests can explore Holidays Around the World with it’s costumed story tellers sharing traditions and folklore from all corners of the globe. With it’s special meet and greets you can have your picture taken with at least a half a dozen different cultures version of Santa Clause.

At night the Candlelight Processional combines seasonal music with a celebrity narrator reading the Christmas story. 12 narrators will host this holiday fan favorite this year, taking turns nightly to delight their audience in Christmas splendor. In addition, the ever popular laser and fireworks display ‘IllumiNations: Reflections of Earth’ gets a spectacular seasonal finale.

Disney Resort Hotels
There’s no better time of year to go resort hopping at Walt Disney World then during the winter holidays. As the entire resort prepares for Christmas time, each Resort Hotel is bedecked in holiday finery of wreaths, trees and garlands that reflect the feeling of the resort theme. Disney’s Grand Floridian is renowned for it’s life size Gingerbread House constructed each year, and the Animal Kingdom Lodge is known for it’s gigantic centerpiece tree. However no place feels quite as much like Christmas at Disney’s Wilderness Lodge where the North Woods comes alive. In addition, on select holidays you can delight in delectable dining experiences designed to make your spirits bright from festive Thanksgiving feasts to lively Character Dining experiences.

These are just a few of the holiday treats in store for guests heading to the Walt Disney World during the Holiday Season. It’s a magical time of year and one of the most popular with fans from around the world.